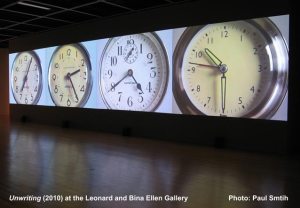 Time will have passed. Will we manage to say what we want to say before it does? Fear of the empty page, the distraction of another’s presence, typos, telephones calls, and conflicting internal desires are just a few examples of an endless list of obstacles to effective expression. Nelson Henricks’ mid-career retrospective [September 1 – October 16, 2010] brings together two recent video-installations, a dozen single-track videos from the last sixteen years, and several still photographs. Taken together, the works offer the opportunity to see how Henricks negotiates the task of sorting through one’s memories and intellectual will and embedding them in an artistic form with its own history and agenda.

Henricks’ 2010 four-channel video installation Unwriting takes as its subject writing and its compositional (and existential) struggle. Interspersed between quickly alternating still-images of various tools for facilitating communication – such as typewriters, microphones, rotary dial phones and pencils – are images of typewritten text: “There is a gap between what I want to say and what ends up being said. I think of what to say but choose the wrong words.” The soundtrack fills the space with rhythmic clapping, typing, and ticking while the words struggle to find their shape: “Find a better way to say it. Say it again. Say it better. Rewrite it. Rewrite and revise. Get to the point.” But the point never sharpens and the pencil lead breaks repeatedly. We are left with the promise and the impossibility of reaching the object of our/the writer’s thoughts.

In the two-channel video installation, Map of the City (2006), we read the narrators running commentary as he navigates through an unfamiliar city, Rome. Rather than filming perambulations, however, Henricks compiled thousands of still-images of all sorts of things: maps, relics, marble sculptures, neon-lighting,  and graffiti, as well as old wallet-sized photographs, small toys, game pieces, watches, coins, matchbooks and other trinkets, each small enough to carry in the palm of one’s hand. The objects are photographed against brightly coloured backdrops, stressing the particularities of their character and material surface, while also concretizing the resulting image into an object itself. In some parts of Map of the City, images and text are paired like a story book; in other parts, the objects are shown beside sketches of them. And in yet other “chapters,” the images, thematically grouped, follow each other in quick succession, pausing only long enough to offer a passage of text. For example, while details of maps flash by, the text reads “Arriving in the city, you are a stranger… Each person you meet is a possible point of entry.” Then images of entrance-ways appear: “Each face leads to a room. Rooms open onto other rooms. In this way, you will walk the city from end to end.” The skill that is needed by the visitor, therefore, is reading, not only faces but also the memories embedded in objects, their latent potential for expression, and the autobiographical tenor of individual spaces.

In an earlier work, Time Passes (1998), this emphasis on chambers for thought and the fight for survival by way of writing come together. While the sound of pen hurriedly strokes paper with “swirls, dots, crosses, dashes,” we see graceful shadows of plants in a sunlit room and clouds rushing by outside in fast-forward. “No place is as real as this room,” writes Henricks: “This is a considerable task. To transfer one’s self on to paper.”  Indeed. Finding form is always confrontational and perpetually arbitrary. In Henricks’ hands, however, objects, photographs, gestures, personal narratives, sound and moving-images collide in ways that highlight the integrity of each while succeeding to broach intimate questions: belonging and alienation, desire, memory and its failure, and the daunting task of composing one’s life.