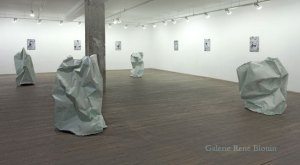 Blue-tinged icebergs? Hand-made plaster sculptures? The sleek cool signature of Pascal Grandmaison is hard to discern when first entering his recent exhibition at Galerie René Blouin [November 27, 2010 – January 8, 2011]. His new work holds several surprises: while it continues his investigation of the mediated photographic act, the figure-ground relationship, and the representation of the invisible, the three works included here are rich in metaphor, melancholy, and artistic modesty.

The “icebergs” that occupy the main space are collectively titled Desperate Island (2010). Cast in Hydrostone plaster, they are undeniably massive and unmoving, yet appear light, as if floating on the gallery floor. Like over-blown crumpled papers balls scattered by some disgruntled writer, or sculptures by John Chamberlain without the chrome and gloss, the nuances of their creases and shadows quietly await exploration. The passage of time is more geological than performative in face of these “islands,” which has the effect of making our own movements seem manic and disconnected. This effect is central to the conceptual integrity of Desperate Island: Grandmaison used blue photo-studio background paper to make the moulds, traces of which are embedded in the surface. However, if we extend the logic of the actor’s dissociation with the matrix of action that background paper is designed to facilitate, then these islands are not only awaiting their contemporary castaway as an unexplored ground (rhetorically represented by the paper), but they themselves also embody the figure of the castaway, lost in the ground of a context-free white cube.

Unlike islands “desperate” for human action, the islands featured in Grandmaison’s latest video, Soleil Différé (2010), were literally built as a stage: Montreal’s Isle Sainte-Hélène and Isle Notre-Dame, the fabricated site of Expo ’67. Shot is documentary style with a (seemingly) dispassionate eye, Grandmaison offers a non-narrative sequence of stunning video extracts: a leaf caught in mid-air by a spider’s thread; birds chirping on their woodland perches; waves coursing around a boulder in opposing directions; the Buckminster dome shrouded by fog; crumbled concrete caught in a tangle of cobwebs; leaves lapping against stone; water running over walls; and a black-clad surfer riding the giant waves that crest in the canal due to the man-made islands. Over all, the video points to the forces of nature at their most elemental – the collision of water, rock and air, and the vegetal- and animal-kingdoms’ potential to thrive despite human intrusion.

In light of this modern ruin, the site’s name, Terre des hommes, seems ironic: rather than serving as show-case of human action and potential, the forces of nature are eroding its shores and over-growing its edifices. But it is an irony that is more melancholic than humourous, as it points to a failure to follow a straight arrow of time into an era of technological ease and leisure. Grandmaison taps into the Romantic preoccupation with ruins, in this case the loss of the promised future, but does so without crossing the line into didacticism or kitsch. As such, Soleil Différé manages to leave a place for the derangement that the beauty of “natural” imagery can instigate in stale aesthetic codes.

It is this point – that the particular power of beauty or, generally speaking, the aesthetic, lies in the fact that it only available to intuition and remains forever outside the faculties of comprehension and the frames of representation – that the final work in the show, Void View (2010), addresses, albeit (over-)aggressively. Comprised of twenty-eight photographs of ashes, in this case, the powdery residue of images taken by the NASA Hubble space telescope that Grandmaison destroyed by fire, Void View attempts to reclaim the unimaginable – the infinity of the universe – by way of a rhetorical non-image. Speaking of his work, Grandmaison asks: “doesn’t claiming to reveal the truth in fact upend it, subjecting it to opinion? [An image reveals only] one half of the truth – the other half lost in illustrating it – a little like infinity.”[1] Void View’s iconoclastic gesture seems to be asking: how can an image-maker in today’s hyper-mediated cultural milieu succeed to isolate a subject worthy of critical attention and mobilize the out-of-frame in a way that harnesses (and liberates) its potential to disrupt our understanding of the very subject in question?

In this small sampling of work, Pascal Grandmaison demonstrates once again that, at its best, his work is both formally exquisite and theoretically rigorous. These three new works cohere in the sub-text of their own limits of representation, thus suggesting the necessity of a sustained artistic engagement with the nourishing but frightening uncodifiable real.

[1] Grandmaison in conversation with Béatrice Josse, “Before Beginning and Beyond the End,” in Pascal Grandmaison: Half of the Darkness [exhibition catalogue], curated by Kevin Muhlen, Casino Luxembourg, 2011.