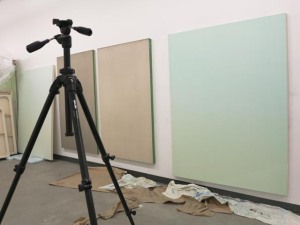 The quiet, visual intimacy of Chris Kline’s painted surfaces has been consistent in his work, and consistently oscillatory. The Dividers series of 2011-12, for example, revealed the slender, straight wooden cross-bars of the stretcher underneath translucent poplin, which was painted with minimal vectors of colour only perceptible enough to interrupt the voyage into the depth of the canvas. The effect is paradoxical: the untreated poplin and evidence of its supporting structure allowed no such imaginative leap, and yet it did. Perhaps this spatial paradox – between illusionism both painted and dreamt and a relatively unaltered materiality – is where one can begin to unravel the tension that ensues from viewing Kline’s work.

The tension, I should specify, is not at all taut: it is highly pleasurable, like a playful negotiation of candor and seduction. The paintings “function” as instigators of this push-and-pull, thereby viscerally implicating the viewer into their warp and weft. Take for example the rectangular surfaces where Kline demarcated a square space, and that’s it: two distinct shapes held in equilibrium through a careful choice of colour (Untitled, 2013-14). The viewing experience of these works, however, has little to do with the mind’s eye of geometry. Rather, the paintings pull on the body of the viewer to line him/herself up with the center. The lines of single-point perspective do much the same but it is the difference in effect that is salient: we are compelled to get in line, so to speak, but once we do we are abandoned to an open field that the eye cannot master. In effect, we are left looking at a speculative space rather than an array of our visual possessions. In this series, the XYZ axes of rational values are reabsorbed into the body rather than externalized and imposed onto the landscape.

The series Local Condition, 2012-14, does not exert this pull of a perceptual center. Here, the surface of the canvas is brushed with nuanced gradients of sky-like colour, If the framing of squares plays with focus and focal points, this deployment of vertical rectangles plays with peripheral vision and infinity. By zooming-in we can graze their highly tactile surfaces but such part-by-part looking is only a reaction to the enigmatic openness the paintings present. Given the topological emptiness of the surfaces, their physical boundaries seem arbitrarily set, as if literally excerpting a piece of sky from the earth’s atmosphere. Here our position is unresolved, yet-to-be-determined, and euphorically in-process.

Also presented in this exhibition are discrete works on paper, square and grey (Tailing, 2013). They reveal a surface so subtle that it appears to be a photographic image rather than an actual index of Kline’s working process. The paper has been bathed in a solution of ink and then hung to dry; consequently, a border-line has formed on the bottom edge where surface tension prevented the liquid media from spilling over. Kline’s intervention is in plain sight here, and yet it is so minimal that the ground literally shines through. It asserts its receptivity, like light-sensitive silver’s mirroring of factual appearance. “Fact” and “facture” is ambivalent in Kline’s work. His process – which is equally evident in his paintings – is of doing and doing again in a spirit of doubt and willful tenacity.

Returning to the earlier discussion of push-and-pull, Kline’s paintings also function like records of the viewer’s engagement. This charges them with a personal sentiment akin to the testimony of a visual experience that stays visual. This is their greatest strength: Kline’s paintings are precise and articulate and yet irreducible to words, and, as such, in their intimate silence, proclaim the ongoing necessity of probing the embeddedness of the I/eye in a thick, lived spatiality. Merleau-Ponty would called it the “flesh” of the world. Even without explanation, the term resonates with carnality rather than the abstract coordinates of a digitalized, globalized space of information. Is Kline’s work therefore a compensatory act of reparations for the time spent at our respective terminals? The title of this exhibition, Local Condition, might suggest as much. But the overall tone is a mix of persistence and resignation that I would align more with a pragmatic exploration of visuality – more with a search for some sort of fullness in the vertiginous spin of simulacra.

Perhaps here, now, I’ve come full circle to the intimacy with which this discussion began: Chris Kline’s spatial negotiations ground our desiring eyes in embodied weight, thereby compelling movement from our own motivational centers. What is at stake, as such, is “I,” the most intimate and conflicted of spaces.